Banyan provides a human-readable policy framework so that admins can implement zero-trust access controls in their orgs.

Traditionally, access control policies have relied on powerful but dense policy constructs based on XACML or IP Whitelisting. However, as the population of client entities requiring access to corporate resources grew increasingly diverse, and as more security tools were used to protect enterprise environments, management became increasingly complex. Enterprise IT teams struggled with rule proliferation, attribute maintainability, and management of tools’ nomenclatures.

A Role is an admin-defined group of users and devices; these groups are made up of those who will need access to a Service.

The specific access privileges of a Role are determined by the Policies that mention the Role.

For more information on configuring Roles, refer to the section on Roles.

A Trust Level is the result of the Trust Scoring calculation, which can be any of the following: Always Deny, Low, Medium, or High. The meaning of each Trust Level evaluation can be found in our glossary.

The Trust Level is computed in real-time, using machine-learning based on user, device, infrastructure, network, and Trust Factors collected from both our sensors and third-party security tools already deployed in enterprise environments.

The Trust Level is used in zero-trust authorization decisions. Admins can then specify Policies with the minimum-allowed Trust Level needed for an entity to access a Service.

Banyan analyzes raw information about a device (such as its features and settings) and classifies it into Trust Factor categories. Trust Factors typically involve security measures (such as firewall, disk encryption, screen lock, etc.), preferred applications (such as corporate-managed or productivity-related applications), and general performance (minimum allowed OS version).

A Policy is a set of authorization rules that specifies which client entities can access a given Service.

Banyan bases Policies on Roles rather than individual client entities, simplifying policy creation by grouping entities with similar access privileges. Admins create Policies that specify the Roles and Trust Level requirements for the user and device accessing a service.

The example below shows an example Policy that only grants access for web services to the Engineering and employee-owned Roles (those which only include members of the engineering team who own their own registered devices). Users with these Roles must have at least Medium or High Trust Levels to access the applicable service(s). 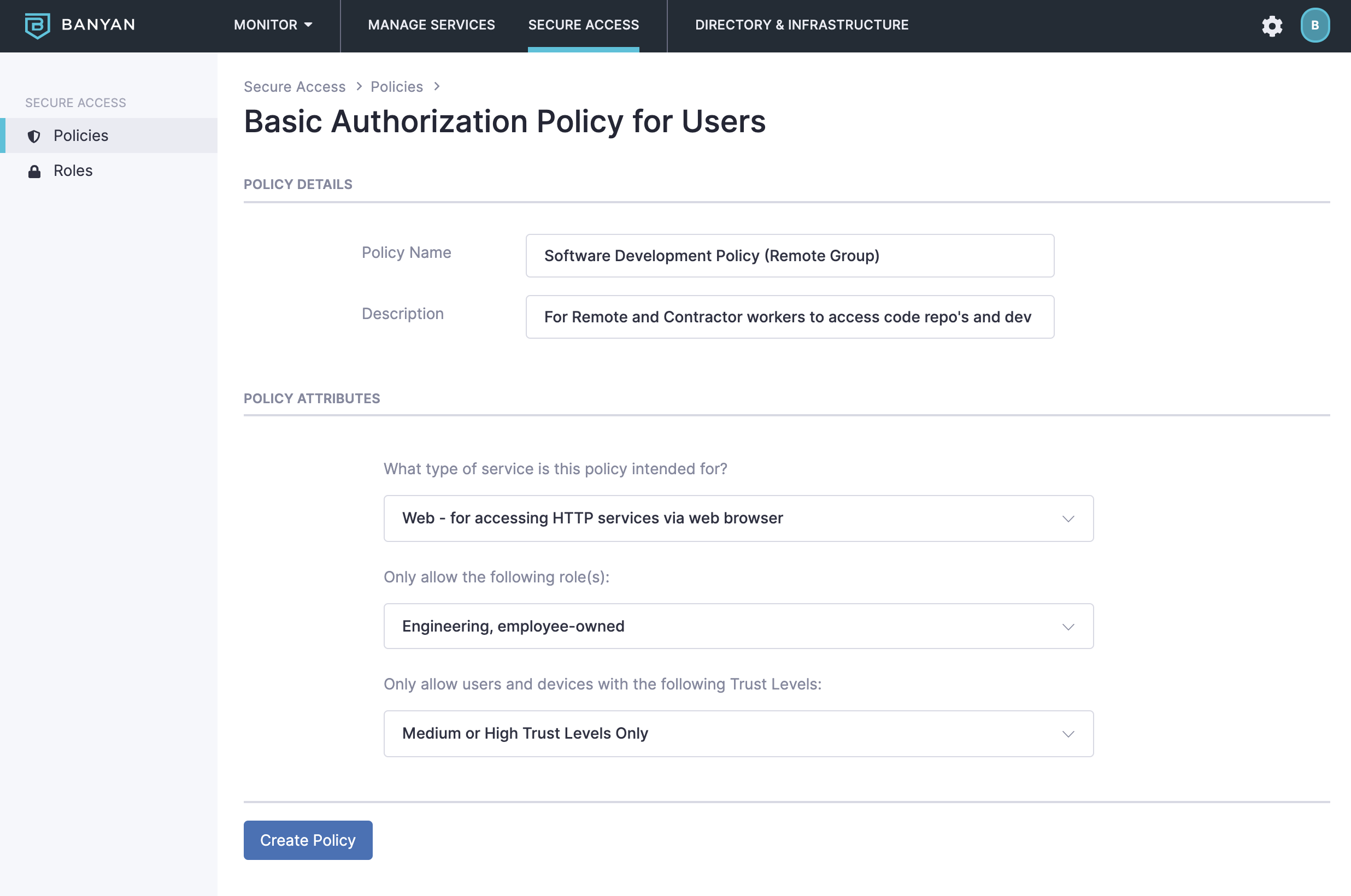 For more information on configuring Policies, refer to the section on Policies.

Review the Glossary of terms used in the Banyan product.